“Before we returned the remains to the next of kin, I found this image captured in his eye lens, moments before his death. Obviously I withheld it for evidence. Anyone know what I’m looking at here?” – Overheard discussion at Arbite Precinct 882, Hive Mortemus.

Rule no.1 if your photograph is not up to scratch: chuck a filter on it, and use it to set the mood. So, like much of the internet, I was set abuzz by the reveal of Kill Team, and I instantly knew what I wanted to run. Necrons! I’ve always loved the little metal skeletons, as they were the first ‘new’ army to be released when I started collecting way back when in 2002. I wanted to make my Necrons stand out from the crowd, but it wasn’t until  Warhammer Community revealed all the unit choices for Necrons did I properly get excited. Why, I hear you cry? Flayed ones. Flayed ones, in my mind, are some of the most interesting aspects to the Necrons; created by an insidious space virus/curse from a dead god that infects the unfortunate minds of the necrotyr with the rather uncharacteristic compulsion to flay the skin from the dead,and wear it in a cruel mockery of the flesh they once had before they were interred in their necrodermis. All good stuff. There’s not a lot more to go on other than that, which gave me the opportunity for some real creativity. It seems to me that Necrons, whilst fun, aren’t burdened with a lot of opportunity for individualism or identity, something that is both reflected in their lore (the rank and file warriors are essentially mindless), and in their rules (In both Shadow War and Killteam, they have their set weapons given to them and they couldn’t mix and match). In my mind, giving everyone the Flayer sickness gives me the opportunity to give each  Necron a personality they would otherwise be missing, even if their personality will all be different shades of ‘your face would make a fetching hat’.

My Kill team is going to be a group of Necrons who are either the last survivors of an entire Dynasty, or have simply awoken ‘too early,’ but are slowly succumbing to the Flayer virus and do not want to awaken their brethren for fear of being wiped out.

Whilst I finish off the warband, I couldn’t resist snapping a few photos to show off. 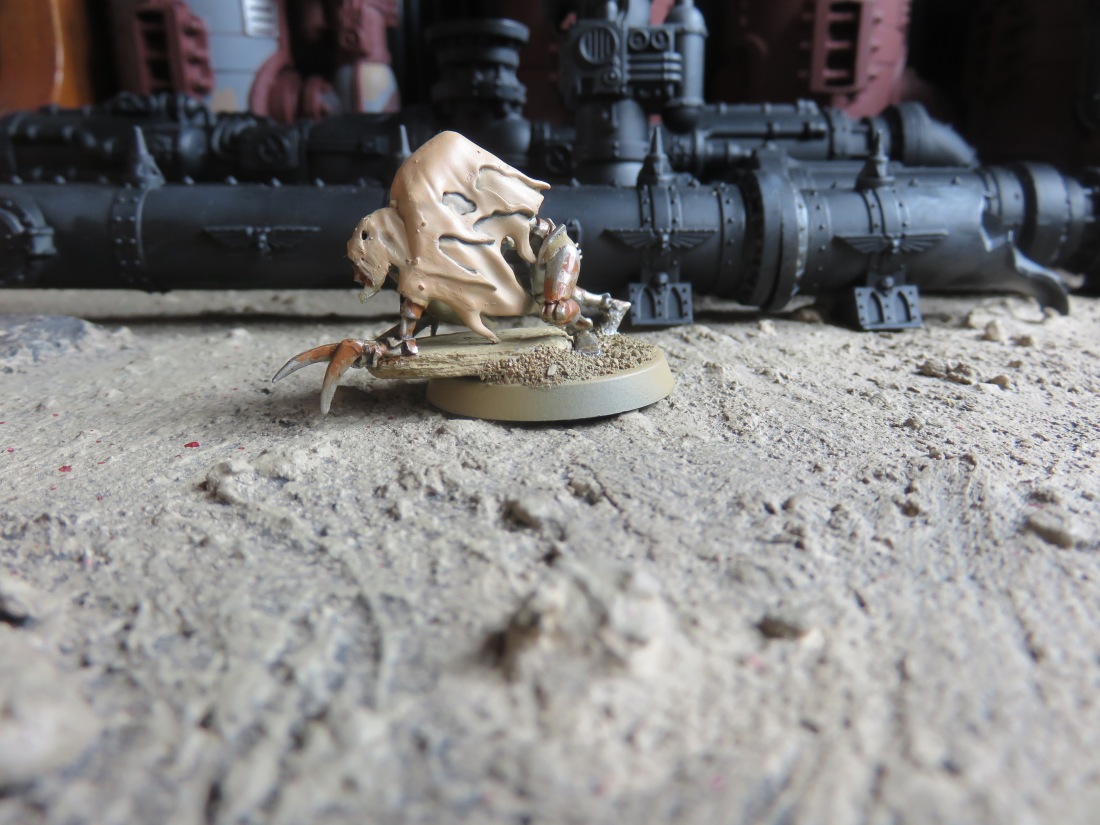 Most of the metal work is done, but I still have weathering the flesh to do for this Flayed One. Because I have predominantly used the Finecast Flayed Ones to make my rank and file Necrons, I felt I needed to ‘one up’ the existing formula. If my Warriors are covered in skin already, I had to make my Flayed Ones stand out. I’ll leave you to try and guess what kit came to the rescue.

Once they are all finished, I’ll show them off with some better pictures, but I just wanted to share them! I am so pleased with how they have turned out. Now if you excuse me, I have a lot of blood and grime to paint.

Welcome to a new blog that will detail my exploits into the world of miniature wargaming and photography. Whilst I’m no stranger to posting online about wargaming for years now, I took a significant hiatus from the hobby after becoming disillusioned by the magnificent products of other hobbyists in comparison to my rather meagre offerings. The speed in which people are able to produce dazzling miniatures, and dazzling paintjobs in the same time it took me to basecoat a miniature knocked the wind from my sails, and so I threw my teddy out of the pram and stopped wargaming for several years. I have recently jumped back into the hobby now after growing up  a bit and learning not to directly compare my efforts with others.

Doom and gloom aside, I’m hoping this blog will help capture people’s interests as much as it will motivate me!

The primary focus will be exploring the worlds Games Workshop have crafted; the inquisitor 28mm movement still captures my interest as it did all those years ago, but I have begun to explore their fantasy line, as well as looking into 15mm wargaming too. I find modelling and painting cathartic, and it helps me de-stress after a long day, so there may not be much evidence of gaming with these miniatures, but who knows what the future will hold.

I hope you will stay tuned, there will be more posts coming (hopefully).

“We don’t belong in a wasteland.” – Frank Carter